The Circus Togni in Russia

The Circus Togni in Russia 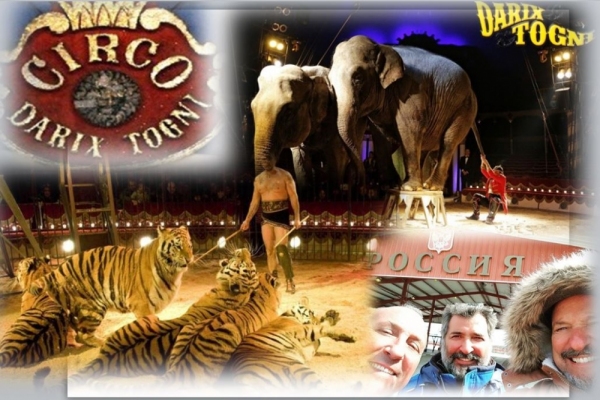 Circus Togni in Russia. It continues in its great success. Livio, Davio and Corrado Togni, who present the best side of the "Italian character" and consolidate the sympathy and affinity between Italians and Russians, an affinity dated over time.
No longer in the traditional tents but a special tour in the stable circuses of the whole Russian Federation where even the animals have their wide heated spaces and are looked after with all possible attention.
The Togni family is in Russia coming from a previous small tour in Ukraine where they had to face many problems given the instability of the area and the risk of having to abandon their animals.
Russia received with great enthusiasm the Togni who had two elephants in tow, 5 Siberian tigers, to various other animals considered as part of their family, and that they protected and looked after even in the most critical situations, especially during the passage from Ukraine to Russia.
Livio Togni - to whom we must acknowledge the great commitment to have worked without reserve to bring the circus and especially the animals to Russia from Ukraine, not without some personal risk - the forefather of the family had declared to us that they could not abandon the animals have always been with them, for example elephants and tigers with them for many years, although it would have been much simpler and much less expensive to leave them / abandon them to a Ukrainian circus that certainly would not have had the same regard for these beings.
We consider animals as part of the family, they too are artists like us, often with greater attention than those we receive ourselves: first we take care of animals and then we take care of ourselves.
Livio Togni told us when in the most critical period he turned to our organization for assistance and help in making the transfer from Ukraine.

The Togni circus has received great support from the Russian authorities who have worked extremely hard, in full compliance with the laws and regulations, to speed up the entry of the Circus into Russia and precisely to avoid suffering animals.
The hospitality of the Russian population of the border town of Belgorod, and more precisely in the border town of Nehkoteevka, was memorable. They welcomed the Togni Family bringing food for all the animals and cooking typical food for the Togni and their staff, all spontaneously: they had learned that beyond the border, in Ukraine, animals and people were subjected to various difficulties ...
An enormous affection shown by the Russians that we know to be very generous, spontaneous, animal and circus lovers.
Today the Circus Togni, "the Italian circus", has the greatest success with always sold out, to the delight of children and even adults, who consider the show of the Italian circus Darix Togni a great event.
The population shows great affection for the Togni who, recognized in the street, receive compliments and a lot of sympathy